Note: This blog post is also available at IBM DeveloperWorks.

In the previous article, we discussed systematic function design: a test, example, and documentation-driven approach to designing functions using the HtDP methodology. In this post, we are exploring systematic data design in JavaScript.

In this three-part series, we are covering systematic design as it applies to:

Let’s now turn our attention to the design of data. 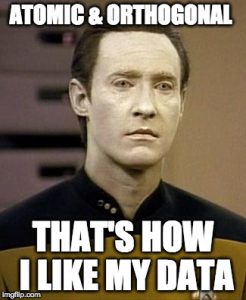 Data definitions bridge the gap between information and data. For example, representing a traffic light in JavaScript could be done multiple ways:

Regardless, we are translating information into data that represents that information. So if var trafficLight = "red", we interpret the data to mean a traffic light signaling to stop.

Data definitions also help us distinguish between similar data. For example, the string "red" may indicate a background color elsewhere in our program.

Similarly, atomic data is specific. Even though a traffic light could be represented by any number of strings, it is specifically the strings "green", "red", and "yellow".

Data definitions should be orthogonal to the way we define functions. In other words, data should be mostly independent from the functions that operate on that data. This helps with refactoring our application later on as it can reduce the amount of places that need to change when functionality changes.

We are going to design three different types of data, taking each through the systematic design process. They are data that represents: a traffic light, a natural number, and a coordinate.

A type comment gives a descriptive name to the new type of data as well as how to form that data. JSDoc provides a way to define our data types using @typedef comments. Let’s look at how we might define a TrafficLight.

Here we are defining a new type called TrafficLight that can either be the string "green", "red", or "yellow". In other words, any string that is one of the three defined above is a valid instance of a TrafficLight.

Note: Although these are just comments and don’t enforce any runtime checks, they communicate the purpose and structure of our data enriching the meaning of any functions that make use of them.

Let’s look at a couple more examples. The natural numbers can represent things like a primary key in a database. Since the number type in JavaScript includes all the Natural numbers, we write a definition like this:

We can also represent compound types using @typedef and @prop. For example here is an X and Y coordinate:

Note: you could use a constructor function as well for compound data. The important piece is that all the properties of the compound data type are documented.

In our Natural type comment, we can use our interpretation to clarify our type as a JavaScript number includes rational numbers and negative integers. Also, throw in the fact that the natural numbers may start at zero or one. For this we can use interval notation to be more specific.

Now our interpretation states that a Natural for our application includes any positive integer.

Take a moment to come up with a clear and concise interpretation of the coordinate example above before continuing on.

Examples provide more explanation of a data definition, if it would be helpful. Depending on whether type is self-defining. For an enumeration like TrafficLight, all the possible examples are already encapsulated in the type comment so examples are not necessary. In the same way, a simple atomic type like Natural documents its cases.

However, Coordinate can be clarified with examples:

The last step is defining a one argument function that operates on that data type. A template function provides a roadmap for any functions created later on that need to operate on this type of data.

Let’s look at a template function for our enumeration type TrafficLight:

A simple atomic type like a Natural has a much simpler template:

You may be wondering, why even write a template this simple. In practice, you probably won’t. Templates are intended to be copied when writing functions that operate on the given data. By writing a template you can easily see all the scenarios you need to account for in your function. You can cut out anything you determine is not needed.

Once you have your data defined, you can use those new types as your write functions to operate on that data. For example, here is a function that indicates if a traffic light is in a stopped state: