Getting Started with the RethinkDB Connector for the LoopBack Node.js Framework

This tutorial is the second in a series of posts that will help you get started with some of the many user contributed NoSQL connectors for Node.js LoopBack framework. In this series we will cover usage of the connectors for:

RethinkDB is described as “the first open-source, scalable JSON database built from the ground up for the real-time web. It inverts the traditional database architecture by exposing an exciting new access model – instead of polling for changes, the developer can tell RethinkDB to continuously push updated query results to applications in real-time. RethinkDB’s real-time push architecture dramatically reduces the time and effort necessary to build scalable real-time apps.”

We’ll primarily focus on connecting RethinkDB to LoopBack in this getting started tutorial, but we’ll include a little bonus content at the end to discuss how to use the RethinkDB real-time features with LoopBack.

RethinkDB offers packages for numerous flavors of Linux as well as OSX, all of which you can find on the main download page.

There are official packages for:

Additionally, there are community contributed packages for:

We’ll be developing on OSX, so navigate to the OSX download page. In addition to building from source, we can also install RethinkDB using the official installer or by using Homebrew. We’re going to use the installer to get RethinkDB up and running for the purposes of our tutorial. Simply download the disk image and run on the rethinkdb-2.0.1.pkg file. 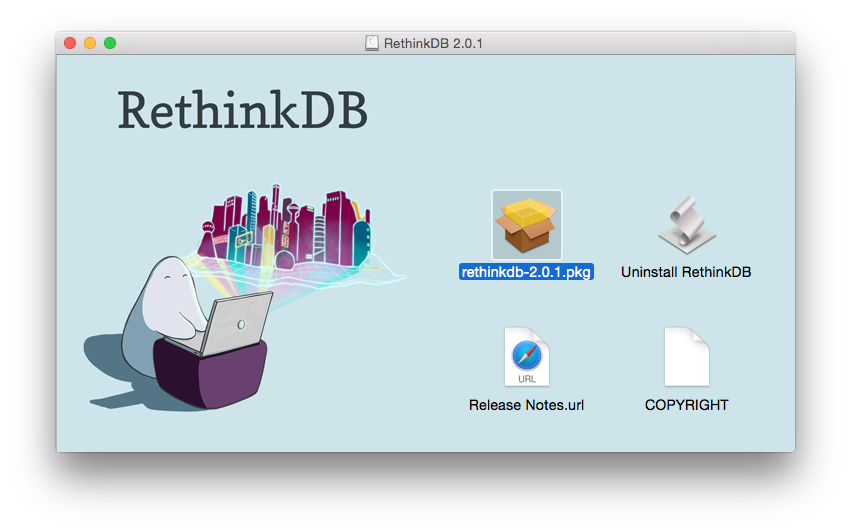 The installer will guide you through the remaining steps in order to get RethinkDB installed.

To start the RethinkDB server, run the rethinkdb command in your terminal.

We’ll need some data in RethinkDB to test our application. I’ve included some sample JSON and a short script that we’ll use to populate our database. RethinkDB creates a test database automatically during installation which we’ll use. You can find the script and sample data in the data directory in the Github repository. Run the sampledata.js file to create some sample documents. This will create a customer table and insert a few documents that we’ll use for testing.

Now that we have our skeleton and all we need to run a basic LoopBack application, let’s install loopback-connector-rethinkdb from the npm registry.

Alright, now that we have the RethinkDB server and loopback-rethinkdb-connector installed, let’s setup our RethinkDB datasource. We’ll start by again using the extremely useful slc from the command line. This time we’ll tell slc that we want to create a new datasource.

We’ll need to fill in the remaining information to connect to RethinkDB.

Now we’re ready to create the LoopBack models that represent the sample data we added to RethinkDB. There are three main ways in which you can create LoopBack models, all of which were reviewed in my previous post on Couchbase Server. Since we’ve already used the command line, let’s switch it up this time and use slc arc.

StrongLoop Arc is a graphical UI for the StrongLoop API Platform that complements the slc command line tools for developing APIs quickly and getting them connected to data. Arc also includes tools for building, profiling and monitoring Node apps.

Start Arc by running slc arc from the command line.

Your browser will automatically open to http://localhost:55988/#/. Click on Composer to launch the LoopBack model composer. 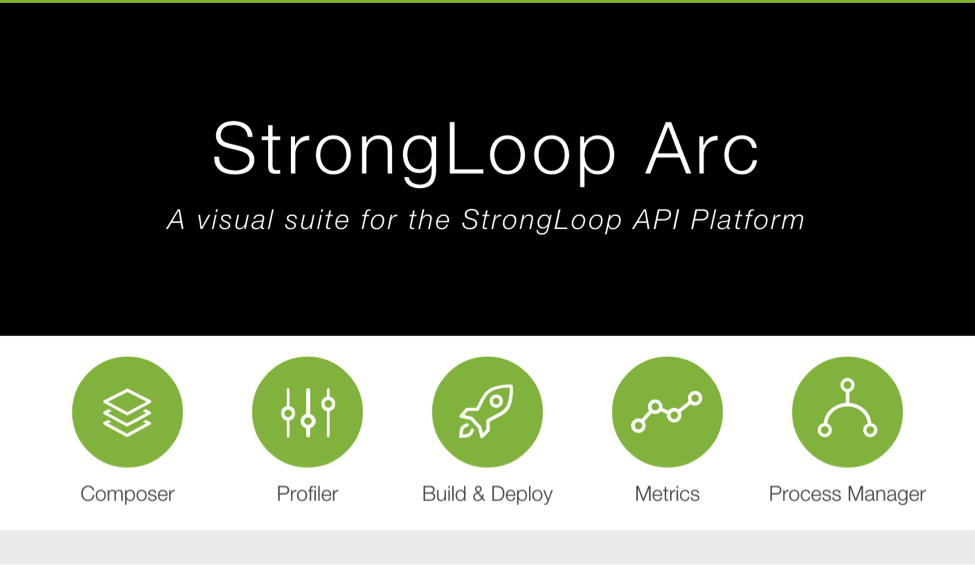 Click on “Add New Model” in the menu on the left, enter “customer” as the model name, “customers” as the plural name and select “rethinkdb” as the datasource.

Next, we need to enter the properties for our customer model. Fill in the names and types for each property as shown below.

Click “Save Model” and go check out the common/models directory inside our project. Arc has automatically created the files necessary to represent our customer model using the properties we entered in the GUI. Simple!

Start the LoopBack application with slc start (slc to the rescue yet again) and navigate to http://localhost:3000/explorer in order to use the built in Swagger API explorer to view our customer model. 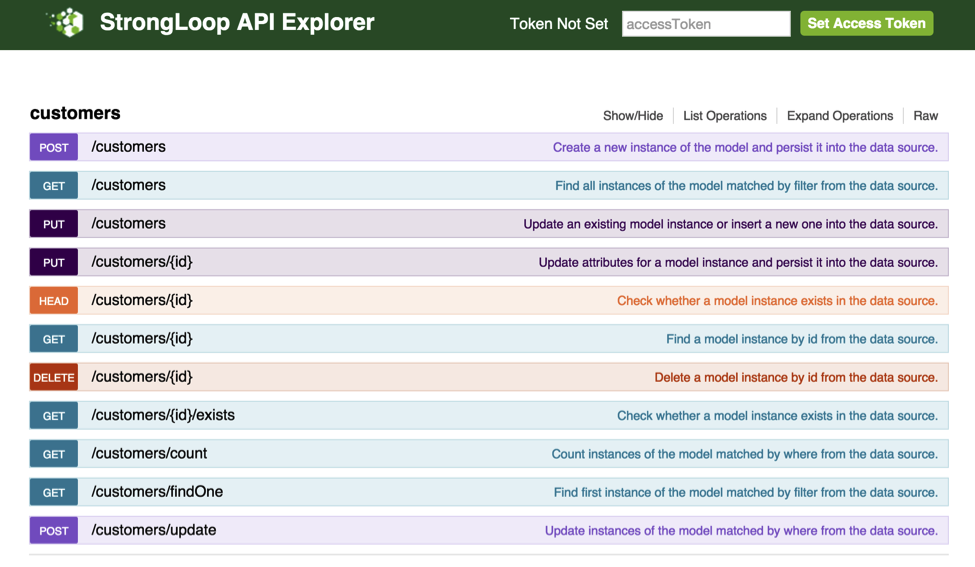 Click “Try it out!” under GET /customers to see our sample data. 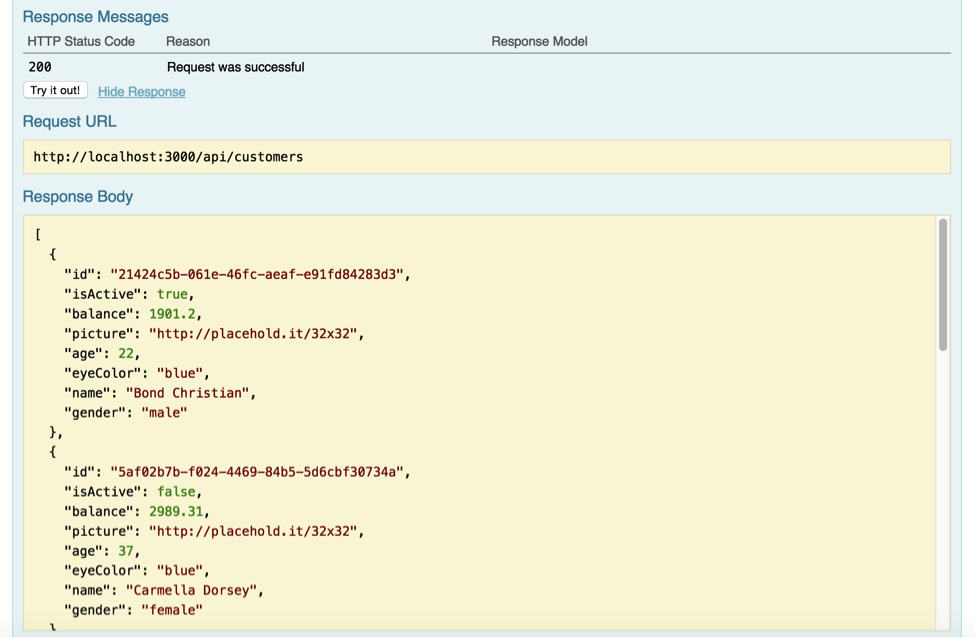 We’ve seen that we can view our customer model via the Swagger explorer. Now, let’s take a look at some of the more advanced features of API interaction using loopback-connector-rethinkdb.

We can get a single document by calling GET /customers/{id}.

In addition to equivalence, the connector supports the where filter types between, gt, gte, lt, lte, inq, nin, neq, like and nlike. We’ll cover a few examples here, but you can see many more in the LoopBack documentation.

Find documents where the balance is greater than 2000.

Use like to find documents that match a certain expression.

In addition to using the format above, you can also use stringified JSON with the REST API to create your filters. Here’s an example with the inq operator.

Of course, the connector also supports other filter operations like order, limit, and fields.

When we initially created our application, LoopBack also generated a POST endpoint for our customer resource so that we can easily create new customer documents.

Note: We provided values for the document id when we loaded our initial sample data, but if you do not pass in an id field when creating a document, RethinkDB will automatically generate one for you.

Updating a document is as easy as creating or querying – simply send a PUT request to the individual customer resource using the document id.

Now that we’ve covered the basics of creating a LoopBack API application and connecting it with RethinkDB, let’s look at how we could possibly use the RethinkDB real-time features with LoopBack.

First, we’ll create a simple script that will listen to changes on our customer table and output notifications to the console. The portion of the script that listens for changes is one line of code. That’s how simple it is to implement real-time functionality in RethinkDB. You can review the script in this tutorial’s Github repository.

Make sure RethinkDB and the LoopBack application are started and run this in one terminal window to start the script and listen for changes on the customer table.

Next, open up another terminal window and insert a document into the customer table using our REST API.

You’ll see that in the terminal where we started the rethink-changes.js script that RethinkDB immediately recognized that we added a new document and sent a notification to the console. Real-time notifications with one line of code!

You’ll also see that RethinkDB returned and old_val object which is null. That is because this is a brand new document so there is no “old value” to reference.

Let’s update our document and see what kind of notification we get now.

Now we get a notification from RethinkDB that includes both the old values and new values of the document that we updated.

Incredible! Is your head spinning with ideas on how you can use LoopBack along with RethinkDB’s real-time functionality to create awesome applications? I know mine is!

Even though the documentation for loopback-connector-rethinkdb is missing, the connector is solid and this article will give you a headstart to using LoopBack with RethinkDB. If you stop here and and only use this connector with LoopBack and RethinkDB for your REST API, you’ve already created an amazingly simple, yet powerful application.

If you want to take the next step and create applications using LoopBack along with RethinkDB’s real-time functionality, I hope this article has you excited to dive in and imagine your own applications that can be created using these two amazing technologies!

You can find the code for this article on Github.

If you are working on a Node project which needs real-time communication with other Node and/or Angular apps, devices and sensors, checkout StrongLoop’s new unopinionated Node.js pub-sub for mobile, IoT and the browser!