In the first two articles in this series, you built a REST API using StrongLoop LoopBack and several AngularJS directives that use your API via the LoopBack AngularJS SDK. With these two components, you’ve done most of the work of building a hybrid mobile app using the Ionic framework. The Ionic framework is based on AngularJS, and, thanks to AngularJS’ flexibility, you’ll be able to use the `timer`  and `timeList` directives in your mobile app without any changes.

Packaging Your Directives For Ionic

Recall that your directives from the second article in this series use AngularJS’ templateUrl property to load their HTML from the server. For instance,

Loading templates from the server makes sense for desktop browser apps, but it’s a terrible choice for mobile. Luckily, our mobile app will be packaged up so the HTML file will be served locally. That said, it still has to do an Ajax call and read the file from device storage. In order to avoid making an HTTP request for a template, AngularJS developers usually leverage the template cache. If you want to learn about the template cache in more detail, check out Chapter 6 of Professional AngularJS. For the purposes of this article series, you only need to know that AngularJS won’t make an HTTP request for the template if you pre-populate the template cache. That is, if you set a value for templates/timer.html in the cache as shown below, AngularJS will use the cached value.

However, you wrote your directive templates in HTML. How are you going to translate them into JavaScript? As is usually the case with JavaScript, there’s an npm module for that: gulp-html2js. This module takes a bunch of HTML files and generates a JavaScript file that calls $templateCache.put() for each of the HTML files. To use this module, first you need to add gulp and a couple plugins to your package.json:

Next, you’re going to write a gulpfile that defines a ‘compile’ task. This task is going to write 2 files, dist/all.js and dist/templates.js . The dist/all.js file contains all your JavaScript files concatenated into one. The dist/templates.jsfile contains all your HTML files piped through gulp-html2js. By their powers combined, including these two files and adding a dependency on the ‘core’ and ‘templates’ modules is sufficient to use the directives you wrote in the second article in this series. Below is the code for the ‘html2js’ task. You can find the full gulpfile on GitHub

Getting started with Ionic is pretty easy. First, you need to npm install -g cordova ionic. Once you’ve installed Ionic, you should be able to create a new Ionic app in the current directory using Ionic’s handy CLI. For instance, you can create a new app called ‘stopwatch-example’ using the ‘tabs’ app template using ionic start stopwatch-example tabs. You can also just do git checkout step-2 in the ‘stopwatch-example’ GitHub repo to get the starter app.

Once you have the starter app, run ionic serve --lab. This will start Ionic’s powerful CLI and launch a browser that has a side-by-side view of how your app will look on iOS and on Android. The CLI should look like the below picture. 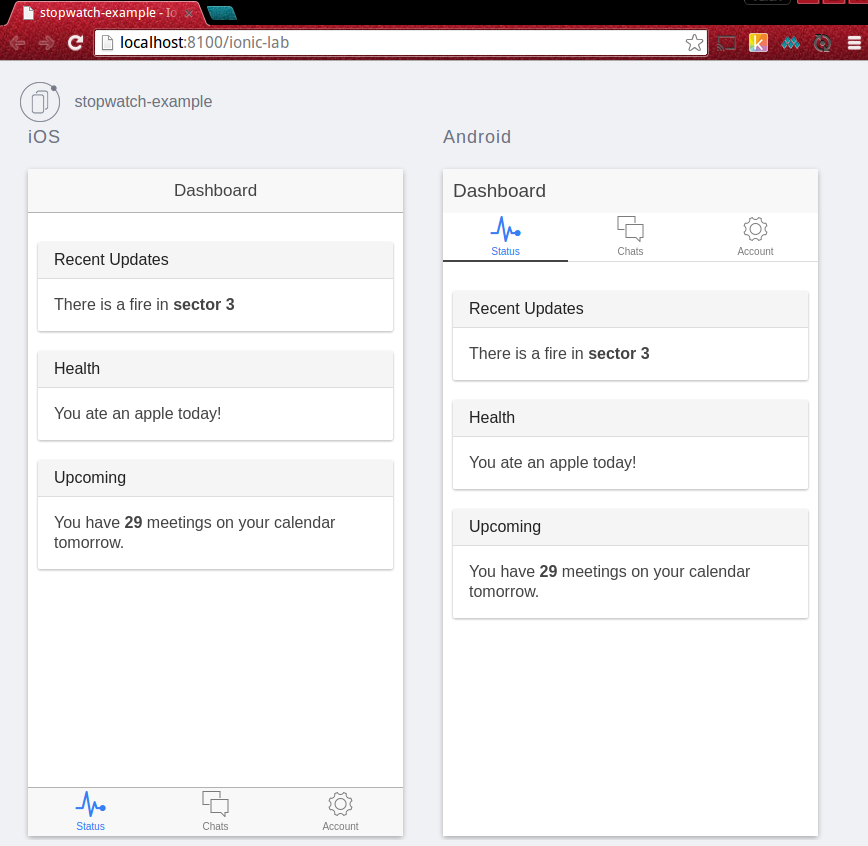 Including Your Directives in Ionic

In this step, you’ll take the Ionic tabs starter app and make it display the timer directive. This will give you a functioning stopwatch app, minus the ability to make HTTP requests to the server.

An easy way to include your directives and templates in your Ionic app is to use the bower package manager. Ionic already uses Bower, so you don’t need to install anything extra. Just add a bower dependency on your GitHub repo:

Once you run bower install, bower will install ngResource and momentJS alongside your directives and templates. You can set the install path in your .bowerrc file, so bower installs into a directory your Ionic app can access.

Your Ionic app also has a main AngularJS module, defined in www/js/app.js. Add the ‘core’ (from directives/index.js) and ‘templates’ (from templates/index.js) modules to the starter module’s list of dependencies. 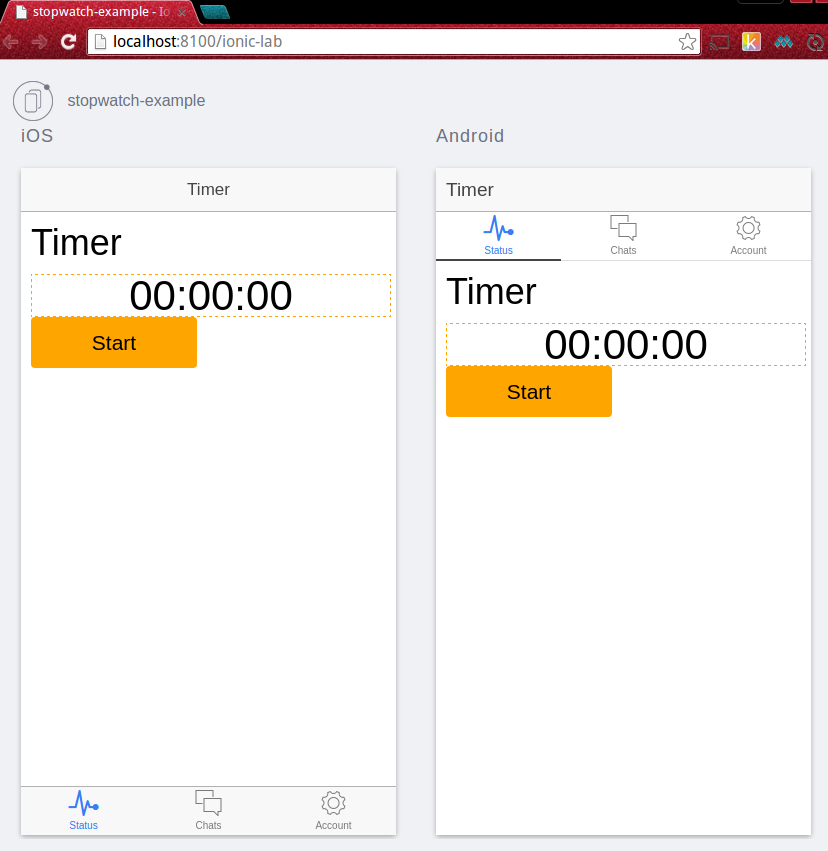 Tying It All Together

You may have noticed that your timer directive from the previous example can’t actually save your times. There’s two reasons why you can’t save:

Thankfully, fixing these two problems is simple. The first problem can be solved with an AngularJS HTTP interceptor. Interceptors enable you to transform every HTTP request your application makes. In particular, the below request interceptor converts every request to /api/Times into a cross-origin request to http://localhost:3000/api/Times.

The second problem can be solved with a Cordova plugin called inappbrowser. You won’t need this plugin in your ionic serve --lab workflow, but Cordova by itself doesn’t have good support for popup windows. Adding this plugin requires adding a line to your package.json .

Now that you have the ‘inappbrowser’ plugin, you get to deal with the most unpleasant part of working with Ionic: browser security restrictions in ionic serve --lab. Opening up an inappbrowser is as simple as calling the window.open() function in JavaScript. The cordova plugin even has some handy events for tracking the state of the new window.

However, window.open() in regular browsers has numerous cumbersome security restrictions. Thankfully, this only affects the login flow in ionic serve --lab, so you can wait for the user to close the popup window before reloading. In a real app, you can register a listener to the ‘loadstop’ event that the inappbrowser plugin broadcasts when the window’s URL changes. You can take a look at the $facebookLogin service that encapsulates this logic here.

Once you’ve configured the HTTP interceptor and added Facebook login, your timer and timeList directives should work as written. You can start your timer, save it, and then see your timer results in the ‘account’ tab. 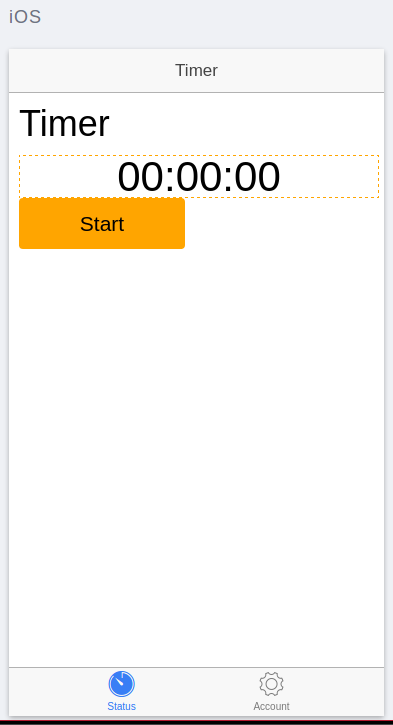 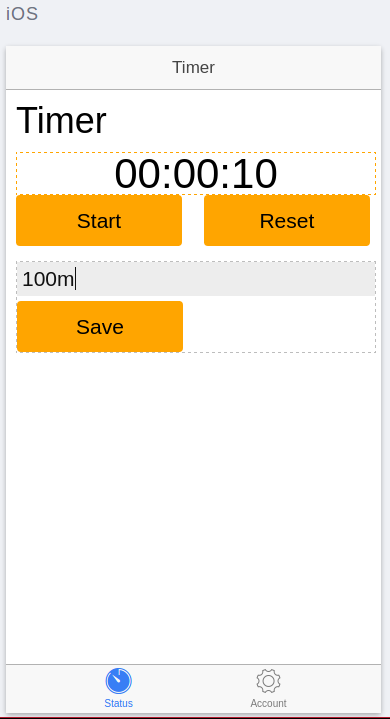 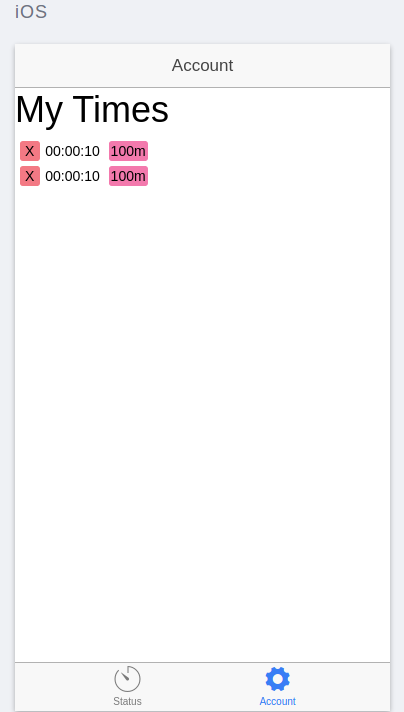 Congratulations! You just took your AngularJS directives and packaged them into an Ionic framework app by adding a build step and making a couple configuration changes. With ionic serve lab, you can work further on your mobile app without any bloated IDEs or SDKs. Note that you’ll still need the proper Android/iOS SDK to compile your app for the app store using ionic build. In the next article in this series, you’ll learn about another key advantage of hybrid mobile apps with Ionic: leveraging AngularJS’ powerful testing modules to write integration tests for your app.