Getting Started with Node.js for the Rails Developer

In this article we are going to do a quick introduction to Node.js and LoopBack for Ruby on Rails minded developers. What’s LoopBack? It’s an open source framework for easily developing APIs in Node and getting them connected to databases like MongoDB, MySQL, Oracle and SQL Server. We’ll cover installing Node, the StrongLoop CLI, look at an example LoopBack application plus how to start out on your own. All the while drawing parallels between Node and Rails commands.

From Ruby to Node

You’ve likely heard in the past few months that some big companies are starting to deploy Node applications in production and at scale. Walmart is running their entire mobile site on Node, which is currently the biggest Node application, traffic wise. eBay has been running a production Node API service since 2011. PayPal is slowly rebuilding their front-end in Node.

You are probably curious about Node and how to possibly make a transition from Ruby on Rails. There’s also something pretty damn cool about going through the whole day without constantly switching context between Ruby and JavaScript. The MEAN stack allows you to use JavaScript literally everywhere: server, database and client.

There aren’t that many frameworks that try to deliver Rails experience for Node. LoopBack by StrongLoop aims to be all encompassing solution, similar to Rails. Lets check it out, but first things first…

There are many ways to install Node:

Node has a version manager called NVM which is almost a feature for feature port of Ruby’s RVM sans a cool web site. NVM is RVM for Node.

NVM is a preferred way to get Node on your development machine for all the same reasons as RVM:

In the interests of keep this article to the point, I’m going to refer you to the NVM manual for installation instructions (which are pretty much the same as RVM).

Most of the concepts found in Ruby translate well to Node. Such is the case for package management and NPM is Node’s alternative to GEM. NPM is GEM for Node. After you have setup Node and it’s in your system path, the npm command becomes available and you can have any of the 70k packages currently published installed with just one command:

One of the differentiating factors between NPM and GEM is that NPM installs all packages in the local node_modules folder by default, which means you don’t have to worry about handling multiple versions of the same package or accidental cross project pollution. The modules folder is a core Node concept that allows programs to load installed packages and I encourage your to read and understand the manual on this subject.

In reality, package.json is a very powerful tool that can be used to run hook script, publish author information, add custom settings and so on.

Because package.json is just a JSON file, any property that isn’t understood by Node or NPM is ignored and could be used for your own needs.

If you are in a folder with package.json and want to install all packages it lists, simply type:

This is equivalent to bundle install in the Ruby world.

Now that we have covered some basics, lets get started with LoopBack, the open source API framework powering StrongLoop API server.

This will install the slc command into your global NPM folder, which, depending on the way you setup Node, would either be somewhere in /usr/local or in your home folder (another reason I prefer NVM). It also installs all the Loopback framework and Devops packages.

The slc tool is our gateway for all things StrongLoop. Think of it as rails command, just for Node. You’ll see why in a moment.

This will generate and start an example app in the “Sample App” or any specified folder. It’s good to run and poke around it to get a sense for the new library because the sample app comes with batteries included:

Open up http://localhost:3000/explorer in a browser and

you should be seeing API explorer which comes in a pluggable, but completely separate NPM module called loopback-explorer (github repository). 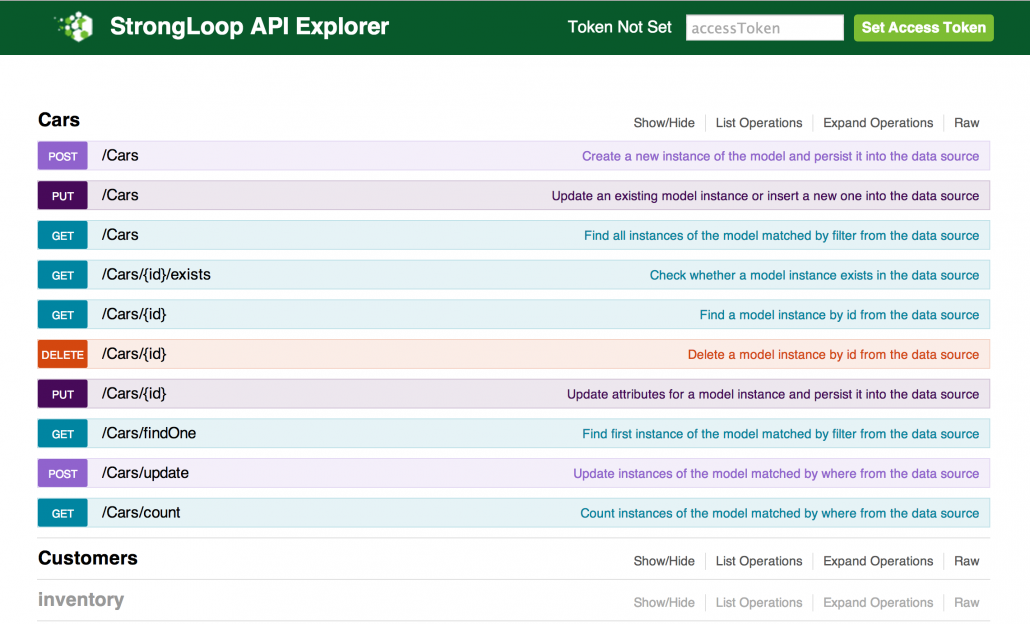 Check out StrongLoop documentation for some additional details about the sample app.

This will generate skeleton LoopBack application (hence slc loopback). This is equivalent to rails new myapp.

Lets look at what we have:

server.js is our main file here where the whole application is set up. If you already have experience with express.js module, the file will look very familiar. There’s some LoopBack magic happens to help you get started faster following convention over configuration mantra that Rails users are accustomed to. There is a placeholder for a client Javascript application under /client

datasources.json stores the backend datasource settings while the config.json has the application host and port settings.

Models will be stored as .json files under /common/models and model-config.json retains the mapping of models to data-sources.

node_modules contains minimum dependencies you need to get your starter application to run.

This is a very simple interactive guide to define your model fields. After completing the prompts, a new model will be added to the /common/models models folder called Person.json

It’s worth noting that json files for models is just a default way to store models. In the sample-app generated earlier each model was defined manually with JavaScript for full control. Check out model definition reference to get a sense for how models could be set up using LoopBack.

At this point you might be thinking that slc loopback command is similar to rails generate and it is, just not as elaborate at the moment.

Previously we used slc run to start the sample application. However, your preferred way to start your application could simply be:

That’s really all to it, it’s that simple to get started. Check out documentation to get a details on how to expose the newly created model via the REST API and full details on working with models and datasources.