How to Deploy a Node.js REST API Server on Red Hat’s OpenShift

The world is moving toward the cloud—both public and private clouds—and infrastructure demands are giving rise to a new generation of integration platform-as-a-service (iPaaS) API servers which specifically handle this use case with the added dimension of cloud versus your own datacenter. Node.js is powering these new iPaaS products because it’s dynamic, highly scriptable, and high-performance. Node hits the sweet spot because it enables developers to glue together disparate pieces of legacy infrastructure and quickly surface an API for next-generation web and mobile applications. Ultimately, it promises to address the emerging requirements for the internet of things (IoT).

OpenShift is one of the most popular PaaS (Platform as a Service) provider used by developers worldwide. OpenShift supports Node.js and StrongLoop API server platforms with default built in cartridges.

Login at at http://www.openshift.com/. Create an account if you don’t already have one.

Ensure you have the latest version of the client tools. As part of this process, you’ll run the rhc setup command and choose a unique name (called a namespace) that becomes part of your public application URL.

For example On OS X, you’ll need to install either the Full Xcode Suite – or – git for OS X. These packages ensure that Ruby and Git are installed and configured.

To update to the latest version of the client tools, use the gem update command:

Using your OpenShift login and password, run $ rhc setup to connect to OpenShift and create a unique namespace for your applications.

Create an application on OpenShift with the following command:

Replace “myAPI” with your application name. You’ll see the following message printed on your console:

Give it a few minutes to complete provisioning of the API server. Once complete you will see the following message printed on the console:

Select “yes”, which will deploy the app finally to OpenShift as well as clone a replica of the deployed app on to your local machine.

As printed on the console output, we can see that the provisioned api application is available on a Red Hat cloud url and also has SSH and Git urls for access. Additionally the project has been cloned to my home folder on my local machine i.e. under /users/username/

Logging into OpenShift we can see the application name and details published under the “applications” tab:

Clicking on the app name lets us see the provisioned specifications of the host system, remote url information as well as gives us options to add multiple backends like MongoDB, MySQL or PostgreSQL to this API application.

Let’s open a browser and type in the

Below we can see StrongLoop’s API explorer which provides an interface to visualize and test the out of box default APIs. As Loopback advocates and follows Model driven development, the User Model is created by default along with all the CRUD endpoints…

Now let’s try to update this API application by adding some custom models and API endpoints.

First of all, we will create a datasource for myAPI application.We will start with a MongoDB type datasource.

As Loopback supports MongoDB out of box from it’s large list of connectors, we will choose the default connector type for our datasource.

Note that the actual mongodb host and port information still needs to be updated in the json. We can add a MongoDB instance on OpenShift and simply point at that within the connector. Please see working with MongoDB or MongoLab

Now let’s create a basic model which is attached to this MongoDB datasource:

As prompted, we can choose to expose the created API over REST and also provide a custom plural name for the account model.

We can now add model properties following the prompts and also if the model follows backend schema validation by setting  the “required” property.

Similarly we will define additional properties of this model.

We will also install the MongoDB connector module of LoopBack as that is a required dependency for the model to work.

Now let us try to publish this updated myAPI application to OpenShift. We will be using git commands as described below for doing that. We will initialize the project in git, add our new files and commit to the git repository

To update the same project on OpenShift we need the Git URL. When we provisioned the app, we got the GitURL as :

In case we forget that we can extract the URL info  from the OpenShift console or by using the git command:

To republish the app, we simply use the following commands:

We should get a successful status as below after a series of npm messages:

We can now validate the updated myapi application on OpenShift cloud by refreshing the same API explorer URL and checking for the accounts model.

First off we can see the new Accounts model (pluralized) being added. Expanding that API, we can also see all the auto-provisioned API endpoints for CRUD operations on Accounts model. 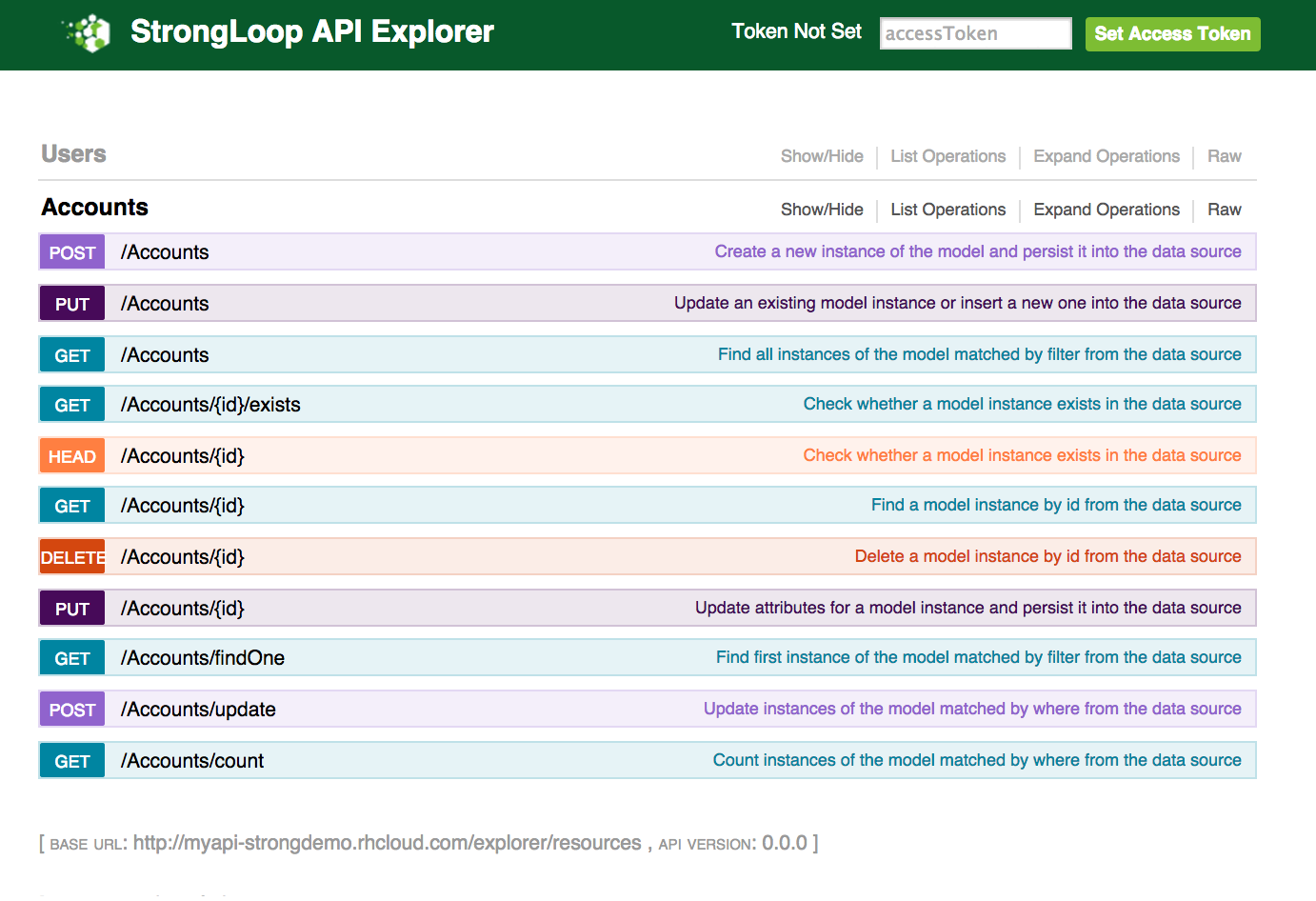 The endpoints can actually be tested and executed through this interface. Here we see a “Get” operation. 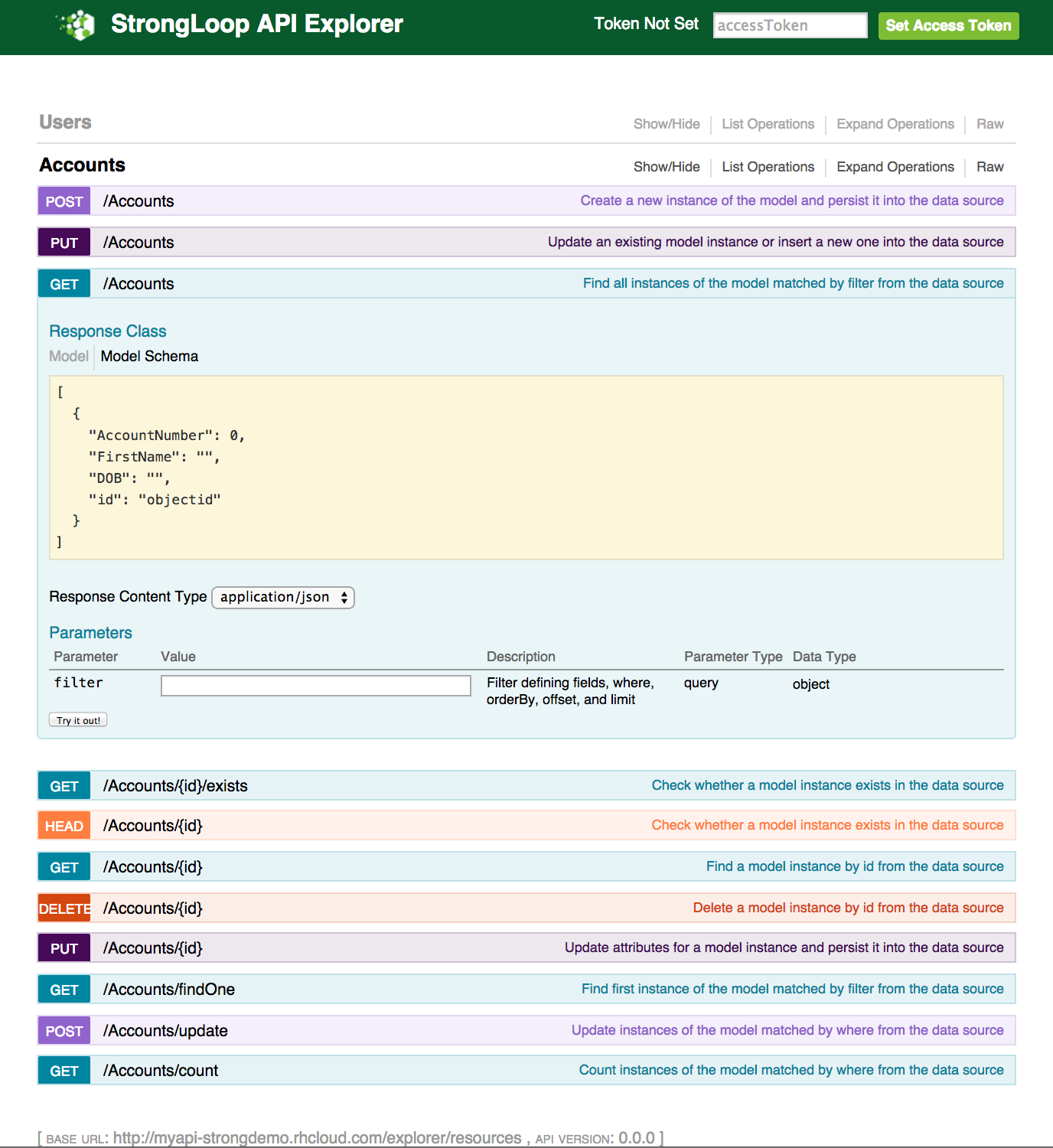