Often times, LoopBack models are used to represent real life entities. As such, LoopBack is able to understand how those entities interact with each other with its concepts of relations. While this feature is alive and well in LoopBack 3, LoopBack 4 now has the infrastructure in place to understand relations between models and supports the hasMany relationship. Read on to see how we have taken a new look at relations in LoopBack 4!

One of LoopBack’s powerful features is the ability to link its models with Model Relations. The logic for related CRUD methods exposed by configuring relations in LoopBack 3 is implemented individually in loopback-datasource-juggler’s relation-definition source file. When thinking about relations in LoopBack 4, we decided to take a step back and explore ways we could simplify our relation implementation anew. Thus, I worked on a spike which aimed to utilize the concept of Repositories and constraint enforcement and flesh out what would be needed to implement the hasMany relation. With Raymond and Miroslav’s guidance and feedback, we were able to agree on the direction of relations in LoopBack 4 as follows:

While I was working on the spike, Miroslav identified and fixed a limitation in our legacy juggler bridge which creates a new persisted model on a datasource every time we create a new instance of DefaultCrudRepository in pull request 1302. This is the key to ensure that the changes made to a constrained target repository created by relations are reflected in the non-relational target repository.

In pull request 1342, I worked on the first iteration of the relations spike which sought to add the following components using an acceptance test for a hasMany relation between a customer and order model:

Afterwards, in pull request 1383, Kyu and I worked on adding more unit and integration test coverage for the components above.

Meanwhile, Janny worked on making the available CRUD API set for hasMany relations complete in pull request 1403. The initial proposed list of CRUD APIs needed to be improved and she worked with Miroslav to simplify the relation API design. She reworked find method, and added delete and patch methods which are applicable to one or more instances of the target model. Check out the API Docs for more information on those methods.

The initially involved implementation of hasMany relation expected users to explicitly declare the relation metadata and manually create the navigational property on a source repository by calling constrainedRepositoryFactory. Kyu and I went on to make UX simpler for users in terms of adding a hasMany relation to a LoopBack 4 application in pull request 1438 with lots of great feedback from the team by:

To visualize how the hasMany relation is set up, the following diagram illustrates a “customer has many orders” scenario with two models Customer and Order. Note that the controllers which expose the REST APIs are not shown. 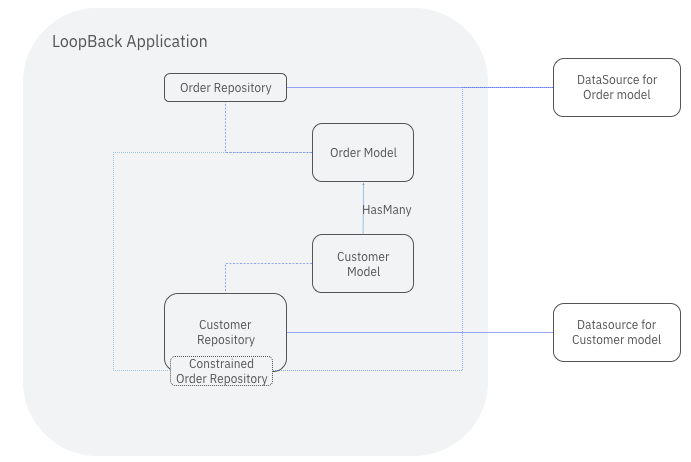 Check out our recent Documentation on how you can define and add a hasMany relation to your LoopBack 4 application! If you would like to have a hands-on experience doing it, check out our example tutorial which will take you through the process step-by-step.

LoopBack’s future success counts on you. We appreciate your continuous support and engagement to make LoopBack even better and meaningful for your API creation experience. Please join us and help the project by: