LoopBack - Taking Express to the Next Level

Express is the most popular Node.js package for web server development. Its lightweight, extensible, and flexible nature makes it a perfect fit for projects, small and large, from simple websites to complex web frameworks.

LoopBack is a framework built on top of Express. It comes packed with tools, features, and capabilities that enables rapid API and microservices development and easy maintenance.

In this post we will explore the points that make LoopBack a compelling choice for Express developers when it comes to API development.

Express and LoopBack Are Not Mutually Exclusive

First off, let’s make it clear that Express and LoopBack are not mutually exclusive. You can very well use an existing Express app or middleware with LoopBack. This capability enables gradual migration from Express to LoopBack, that way you don’t have to throw away your existing code and re-write everything from scratch. 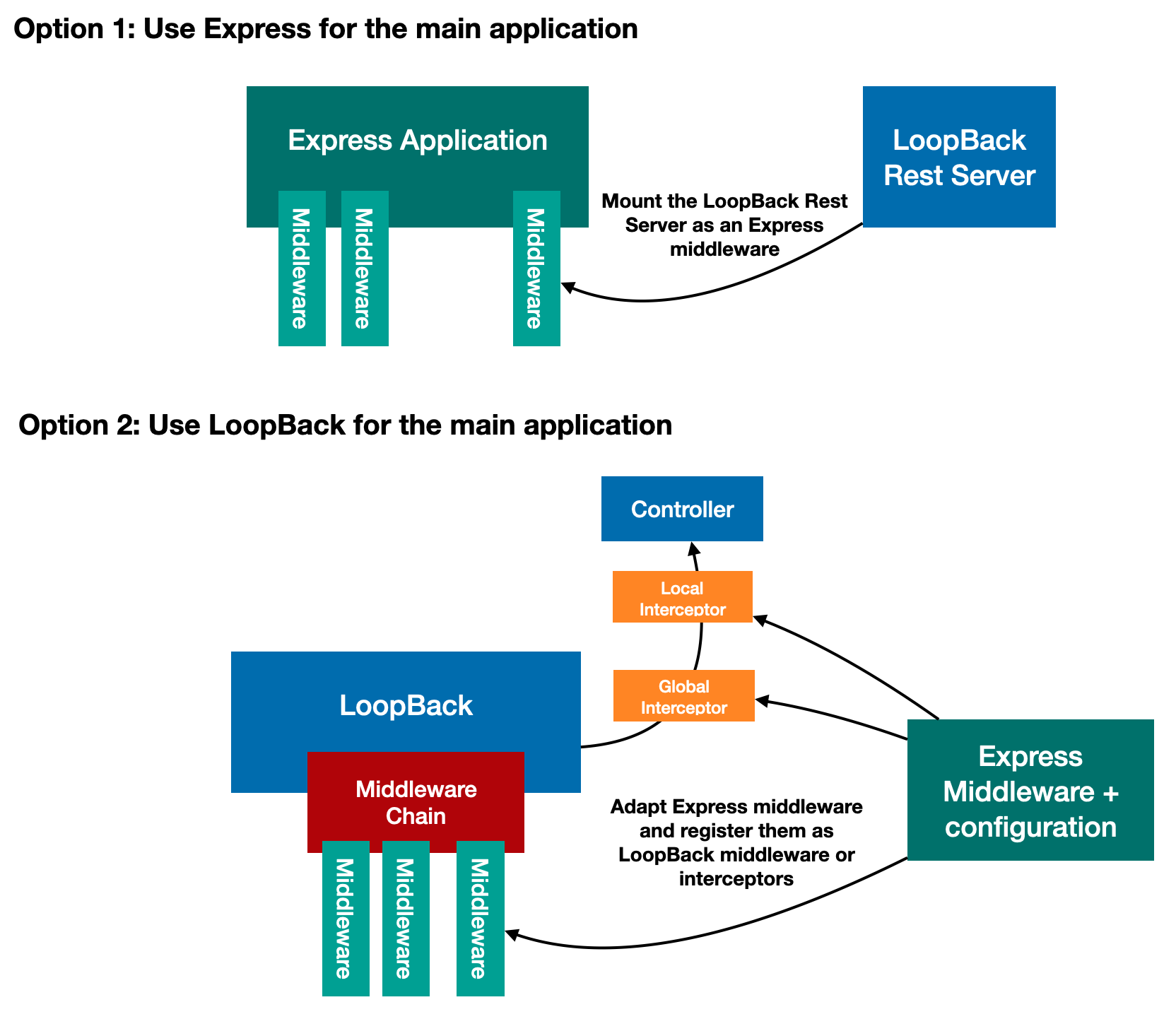 To use an existing Express app with LoopBack, you can mount the LoopBack app on your Express app.

For a tutorial on how to do that, refer to “Creating an Express Application with LoopBack REST API”.

The mountExpressRouter() method of the RestApplication and RestServer class mounts an express router or application at a path, and supports OpenAPI specification for describing the endpoints provided by the router. It is the preferred choice for mounting data endpoints, like an existing REST API app.

For more details refer to “Mounting an Express Router”.

Express middleware can also be plugged into the Sequence class using the invokeMiddleware() action. This approach is recommended when you are not looking beyond a hard-coded list of middleware, when it comes to flexibility and configurability.

Refer to “Use Express middleware within the sequence of actions” for more details.

Express middleware can act as interceptors to controller methods at global, class, or method levels. It is not as simple as the previous two methods, but it provides the most configurability.

The following helper methods from the @loopback/express package enable Express middleware to be wrapped into LoopBack interceptors.

Refer to “Middleware” and “Use Express middleware as interceptors for controllers” for more information.

What Does LoopBack Offer on Top of Express?

Express is a very extensible but bare-bones web server implementation. What LoopBack offers on top of Express is a set of tools and capabilities that make rapid API and microservices development possible and maintenance easy. REST API and microservices development with Express is possible but after a certain level of complexity, it can become a bug-ridden repetitive exercise for each new project. Using a REST API framework like LoopBack cuts down the development time and reduces maitenance headache.

Here are some of the points that makes LoopBack an excellent API development framework for Express developers.

LoopBack is specially crafted for REST API development. The framework’s architecture, developer experience, and everything around it are designed primarily with REST API on mind.

MVC is a popular software design pattern that seprates the internal representation of data, implementation of access to this data, and what is presented to the client. This enables clear decoupling of the components that make up the application, which in turn leads to fewer bugs and better management of the development process.

LoopBack implements the MVC pattern. The models are defined in model files, controllers provide the REST API interface, and views are JSON objects returned by the controller. This not only allows modular development of the project, but also prevents the codebase from getting messy and unmanageable as the project grows.

Repository pattern is an abstraction for data access logic. It is a great way to decouple data access details from models.

In LoopBack, model files define only the shape and properties of models, connection and queries are handled by repositories which are bound to the models.

LoopBack exposes an OpenAPI specification file created out of the controllers in the app, which is essentially the documentation of the whole REST API of the app.

With a datasource defined and configured, once a model and its corresponding repository and controller are created, a CRUD functionality is automatically available for the model without any additional work.

The auto-generated functionality and implementation can be modified by editing the controller and/or the respository files of the model.

Configuring database connectivity and executing queries is one of the most crucial tasks when developing APIs. With the numerous database options available, writing optimal queries, and maybe even switching to a different database altogether can become a very tedious and time-consuming task.

LoopBack provides an abstraction for database access using datasources. All you have to do is select the database you want to use for your app and provide the connectivity details. LoopBack then takes care of making the connection and running the queries in the context of a REST API implementation.

Any time you want to switch to a different database, it is just a matter to speciying a new datasource. You don’t have to worry about re-writing the queries, LoopBack takes care of it for you.

This wide of array of datasources covers almost all the popular databases used for REST API development, which significantly reduces the development time and effort in the database department.

Apart from using the non-database datasources provided by LoopBack, you can create your own services for connecting to external REST/SOAP/gRPC APIs.

These services can then be used in the controllers, effectively creating an OpenAPI-compliant proxy to those remote services. This usage scenario is perfect for proving a custom interface to an existing (legacy) API.

Conventionally, dependencies are passed as function parameters. This method works fine if the dependency is used only in the invoked function, however it can get pretty complex and unwieldy in certain scenarios because the dependency parameter is a factor that prevents the caller and the called function from being loosely coupled.

LoopBack’s Context object is a DI container. It makes it possible to inject dependencies in classes, properties, and methods without having to pass dependecies in constructor or method parameters.

The ability to use DI in your codebase can greatly improve the overall quality of code, increase development productivity, improve tests cases, and reduce maintenance costs.

LoopBack is designed to be highly extensible. It provides extensibility using different artifacts and patterns in different layers of the framework.

The LoopBack Sequence class contains the whole request-response handling infrastructure of the framework, therefore the Sequence is the perfect place for implementing functionality that requires access to the beginning and the end of the request-response cycle - like logging, authentication, etc.

It is very easy to modify the existing functionality or add new ones by implementing a custom SequenceHandler for your app’s Sequence. The Sequence file is located at src/sequence.ts.

Components are great for grouping different but related artifacts for implementing a feature or functionality in the app.

Components can contribute the following artifacts to the app:

Extension points and extensions are the interfaces for developing plugins for LoopBack apps. It is an excellent pattern for adding decoupled extensibility to a software system.

LoopBack provides the following helper decorators and functions for implementating extension points and extensions on top of its Inversion of Control and Dependency Injection container.

Life cycle observers are artifacts that can take part in the starting and stopping processes of the application. They can execute code as the app is starting (such as configuring something) or is shutting down (such as closing the connection to a server).

The LoopBack REST API server is just one of the many possible server capabilities of LoopBack. LoopBack can start multiple servers together of similar or different implementations, making LoopBack an excellent microservices hub. You can use this to create your own implementations of REST, SOAP, gRPC, MQTT and more protocols. For an overview, see Server.

LoopBack supports Interceptors. They are reusable functions to provide aspect-oriented logic around method invocations. There are many use cases for interceptors, such as:

For more details about extensibility in LoopBack, refer to “Extending LoopBack 4”.

Datasources, models, controllers, repositories are great for modularizing the app, but manually creating the files and writing repetitive code with minimal differences for each new entity would be a tedious time-consuming activity.

LoopBack comes with a utility command-line tool, lb4. It has commands for generating datasources, models, controllers, repositories, and other LoopBack artifacts so that you don’t have to create them manually.

Given a datasource, the discover command can generate models files from the database. This can be a great time saver if you are using an existing database of your LoopBack app, and especially if the database had a lot of tables with many columns (or their equivalent structures). If an OpenAPI specification is provided, the openapi command will not only create the model files, it will also create the controller files. This can save even more time.

Refer to the documentation for all the details about the lb4 command.

LoopBack is a TypeScript framework. TypeScript is a typed superset of JavaScript.

Although not directly a LoopBack feature, using a typed language for development prevents many bugs and steers developers towards using optimized coding practices. This can make a significant difference in the development and maintenance efforts when compared to using plain JavaScript.

LoopBack is an open source project backed by IBM, used by IBM products and customers. Hopefully, this gives you assurance on the quality and the longevity of this framework.

In 2020, we look forward to helping you and seeing you around! LoopBack’s success depends on you. We appreciate your continuous support and engagement to make LoopBack even better and meaningful for your API creation experience. Here’s how you can join us and help the project: